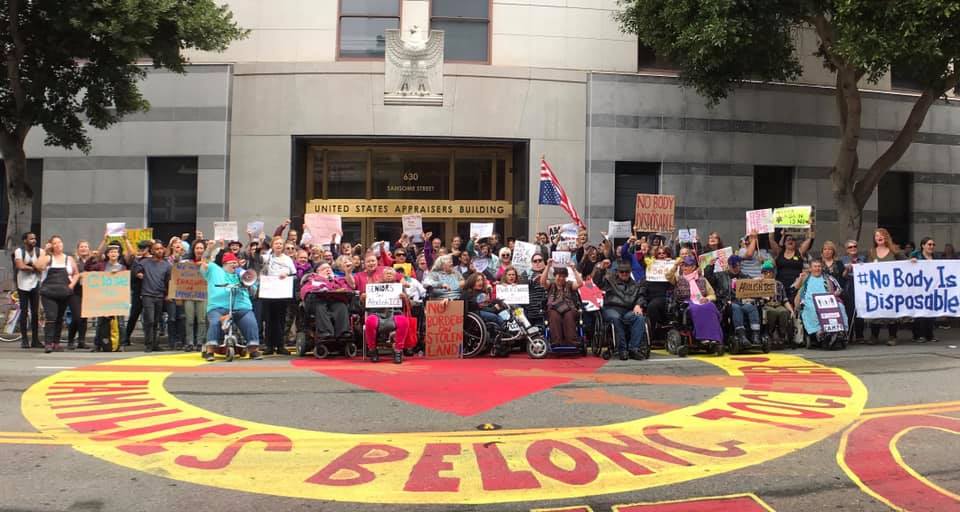 180+ disabled people, fat folks, & seniors/elders — many of whom face huge societal barriers in getting to actions or even out of the house — came out to yesterday’s action in front of the ICE building in SF!  Just as many participated online in some way. No Body is Disposable!!! Every person can take some step to fight fascism, racism and xenophobia. —Stacey Milbern

Below is the text of the speech Caleb Luna gave to the crowd attending the protest.

“Hello everyone, thank you so much for coming out today, and thank you to Max and Stacey for inviting me to speak.

Before I begin, I want to remind us that we are on Ohlone land, that this land was unceded (stolen), and that its occupation has not ended, and that this is integral to why we are here today. Colonization is not over; as Patrick Wolfe reminds us, “invasion is a structure, not an event.” It is an on-going process that continues to structure all of our lives every day, whether we are inside or outside of a cage. And settler colonialism is not a structure that only impacts the Indigenous folks and settlers in the U.S. Historically, the majority of migrants to the U.S. are Indigenous peoples from Central America, South America, the Caribbean and the African continent, who have been displaced from their land due to U.S. intervention in their countries of origin. And while it is important for us to work to limit and intervene in this practice, we also need to be mindful that it is not enough to ask for reform within violent settler states that inherently displace their native populations intact and unchallenged. Colonization is the condition of possibility for the violences that we are protesting today. Without the colonization of Turtle Island—the traditional name for the land mass we call North America today—there would be no settler borders to defend, the professed justification for the ongoing detainment, sexual, verbal and physical abuse and murder of migrants at the border.

As fat and disabled people, we suffer under the same colonialism which produces the conditions of possibility for detainment and genocide, both in the camps at the border and across the globe. We are gathered here to protest a culture of disposability that has colonial undercurrents. Mia Mingus writes that “Ableism is connected to all of our struggles because it undergirds notions of whose bodies are considered valuable, desirable and disposable.” The same cultures that have produced thin and able-bodied people atop hierarchies of privilege are the cultures which construct these embodiments as necessary to citizenship. We need to look no further than the recent suggestion by Ken Cuccinelli, acting direction of Immigration and Citizenship services, to rewrite the language on the Statue of Liberty to only apply to those who will not become, “financial liabilities”—migrants who do not, in the eyes of the State, become dependent. While this horrifying language highlights the ableist priorities of the current administration, we need to also remember that this language is tied to a monument to the colonization of this land. As long as a culture that prioritizes capitalist values of independence and racist, colonial imaginings of national belonging continues to occupy this land, we can never be free.

But in this political moment, in this crisis, we can see clearly that the idea of whose bodies have been imagined as threatening and, therefore, disposable, are specifically migrants from Latin America, the Caribbean and the African continent. And we need to remember that, although non-Black Indigenous and Latinx migrants are frequently spotlighted and explicitly targeted in the hateful rhetoric of the current president, that Black migrants disproportionately comprise the detained and deported populations, and have been for multiple administrations past. Under white supremacist Western models of bodily hierarchies, Black folx of all sizes and abilities continue to be the target of and bear the brunt of legal, institutional, and social policy that determines some bodies (read: white and white- approximate) to be of value, while others are disposable.

So in thinking about the histories that have shaped our imagination of bodies, it is critical to attend to the white supremacist and colonial nature of bodily hierarchies, and the harm and disposability cast upon those at the bottom. We are here because we understand that, as fat and disabled people, we are vulnerable to the same logics that consider migrants criminal, inferior, dangerous, social parasites, and more. The histories of fatphobia, ableism and saneism are integral to the production of racial hierarchies that transfer these anti-Black and anti-Indigenous stereotypes onto other embodied differences in order to reify white supremacy and justify the harm it imposes across communities. We are here because we know that the same rhetoric being used to target migrants can apply to us, too, and, at different historical moments, it has. And we are here because we know that migrants include fat and disabled people too, including those who are disabled by the journey of migration, and who are disabled by their status as undocumented in an ableist Nation-state that distributes its social and legislative space only to those it finds deserving under its own rhetoric.

And we need to be here for reasons beyond our own personal proximity to the cause. The crisis at the border is taking on a regenerated form, but it is not new to Turtle Island—the land that is now called North America. It is endemic to the settlement and colonization of this land, and the concurrent projects of Indigenous dispossession and genocide, including global Black genocide. When making our demands, imagining justice, and envisioning our futures, we need to remember this. We need to remember that it is not enough to consider our own freedom; we must be always working towards freedom for all. Thus, as much as we need to act in solidarity with migrants, we need to interrogate our own anti-Blackness, as well as the anti-Blackness in our communities. Audre Lorde insists “I am not free while any woman is unfree, even when her shackles are very different from my own.” We are here to demand that the state closes the camps, yes. But it is not enough to simply abolish ICE. We must also abolish all institutions that pathologize and criminalize embodied difference, including prisons, mental institutions and the United States itself.

As Eve Tuck and K. Wayne Yang insist, Decolonization is not a metaphor. The crisis at the border is a crisis of settler colonialism, and to heal it we must address colonization; we must demand a future that prioritizes the abolition of Black and Indigenous dispossession and genocide, and a return to Indigenous sovereignty over this land—this land, the land on which we are standing. And also from Palestine to Kashmir, from Mauna Kea to the Amazon. We cannot settle for anything less.

I want to close by centering the lessons of Black feminist epistemologies with Assata Shakur’s infamous call to action as a reminder, and I invite you to say it with me, if you know it: “It is our duty to fight for our freedom. It is our duty to win. We must love each other and support each other. We have nothing to lose but our chains.”

Thank you all for coming, and I’m looking forward to imagining and building this future with you all. “